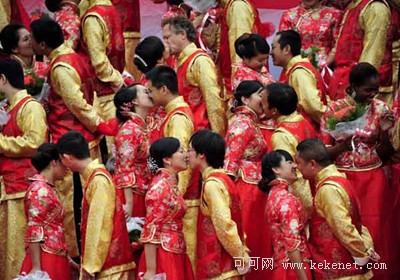 The 25-year-old Shanghai native Liu Yiwei has had an exhausting holiday during the past seven days. Rather than traveling or working overtime, she was busy hopping from nuptial to nuptial arming "red bombs" with piles of cash.

"Red bomb" is the popular name for the red envelopes with money that are given as wedding gifts.

"Weddings are supposed to be joyful occasions filled with blessings. But when too many pile up, you feel rushed to complete a series of tasks," said Liu, who attended two weddings in the past week, one of which she was also "working" as the bridesmaid.

The weddings can also be a "burden" because, according to Chinese tradition, guests should give couples red envelopes containing money as blessings.

"There are no rules specifying how much money you should give at a wedding. Its generally determined by how close you are to the couple," Liu said.

A netizen nicknamed "xiaoxie", in Guangdong province, has had a similar experience. The office clerk in her twenties attended five weddings in three days during the holiday. She wrote in her blog that she had become "more familiar with the routines of wedding ceremonies than the brides and grooms were".

As most of the eighties generation in China has reached prime marriage age, Liu, like millions of her peers, is seeing a new boom of weddings. The weeklong National Day Holiday, one of the two longest holidays in China, has become the most popular time for weddings.

"Its marriage season," said Liu. "Almost all of my friends are either getting married during these seven days or going to weddings."

Although statistics on the number of marriages during the long holiday are not yet available, the Shanghai Wedding Trade Association estimates there has been at least a 20 percent increase in the number of weddings compared with the same period of last year.

"The peak season for weddings has arrived," said Zhang Jie, the office director of the Shanghai Wedding Trade Association. "And the boom is unlikely to fade for the next five years, if not longer, because the nineties generation may soon join."

With the huge demand, its springtime for the wedding planning industry.

According to the association, there are more than 1,000 people trained and registered as wedding announcers on its website this year, which brings the total to more than 4,000.

But during the National Day Holiday, there was still a shortage, which was "unprecedented", according to the association.

Yin Li, a 27-year-old bridal makeup artist, said she had to work throughout the holiday, without the help of her assistant, who was also fully booked during the week.

"All 20 artists and dozens of assistants and students in our studios were totally booked this holiday," said Yin, who had been a film makeup artist until two years ago, but left to enter the more "promising" bridal industry.